TM most effective for good health 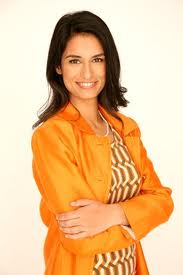 “The Transcendental Meditation technique has been shown to be the most effective health and wellness program there is. Nothing we know of is as effective for promoting good health and reducing health-care utilization and medical expenses.”

“If TM were a new drug, conveying this many benefits, it would be the biggest, multi-billion-dollar blockbuster drug on the market.”

Nancy Lonsdorf, M.D., is a graduate of Stanford University and Johns Hopkins University School of Medicine. In the United States, she is a nationally renowned specialist in natural health and women’s health issues. The author of The Ageless Woman: Natural Health and Beauty After Forty, she has been featured frequently in the national media, including National Public Radio, CNN and The Phil Donahue Show.

“When we’re tired, we don’t think as clearly, are more distractible, and take longer to complete our tasks. We also may stay up too late trying to finish off what didn’t get done during the day. This ends up creating a vicious cycle of fatigue, lack of rest, too much activity, and more fatigue. Taking the TM course is the number one recommendation I make to all my patients because it eliminates stress — the root of most ill health. The Transcendental Meditation practice brings about what no pill ever will – vital health, mental clarity, and boundless creativity from within.”

Dr. Lonsdorf also addresses the value of the TM program for menopausal and post-menopausal women:

“Stress is a trigger for, and major contributor to, common menopausal symptoms such as hot flashes and sleep problems. The Transcendental Meditation program has been shown to reduce anxiety twice as effectively as other relaxation and meditation techniques and is highly effective at reducing stress. Practise of the TM technique for twenty minutes twice a day has been shown to lower cortisol (a stress hormone), improve sleep and lift mood. According to some researchers, curbing excess cortisol production might also support the body’s production of helpful reproductive hormones such as progesterone.
In addition, research on postmenopausal women has shown that the TM technique reduces heart attack risk as well as metabolic syndrome, a precursor to diabetes. This meditation has helped alleviate mood swings and menopausal symptoms in many of my patients in midlife, while helping smooth their emotional transition through a time that can be challenging in many ways. For all these reasons, I highly recommend Transcendental Meditation instruction as part of a comprehensive approach to managing menopausal symptoms.” 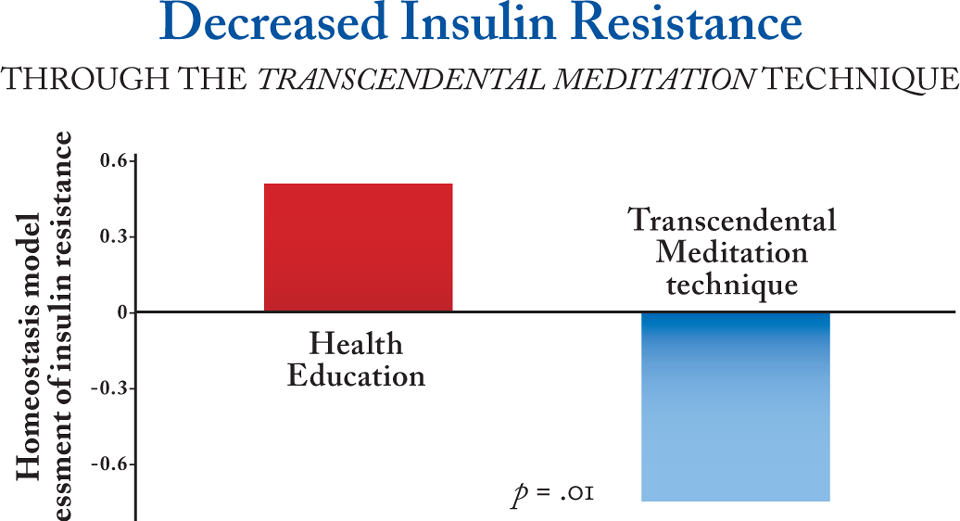 This randomized controlled trial found that four months of practice of the
Transcendental Meditation program led to a significant reduction in insulin
resistance among individuals with stable cardiac heart disease, in contrast to
controls receiving health education. Insulin resistance is one of the components
of the “metabolic syndrome,” often associated with obesity, high blood
pressure, and hyperlipidemia—a risk factor for cardiovascular morbidity and
mortality; insulin resistance may also lead to type 2 diabetes. 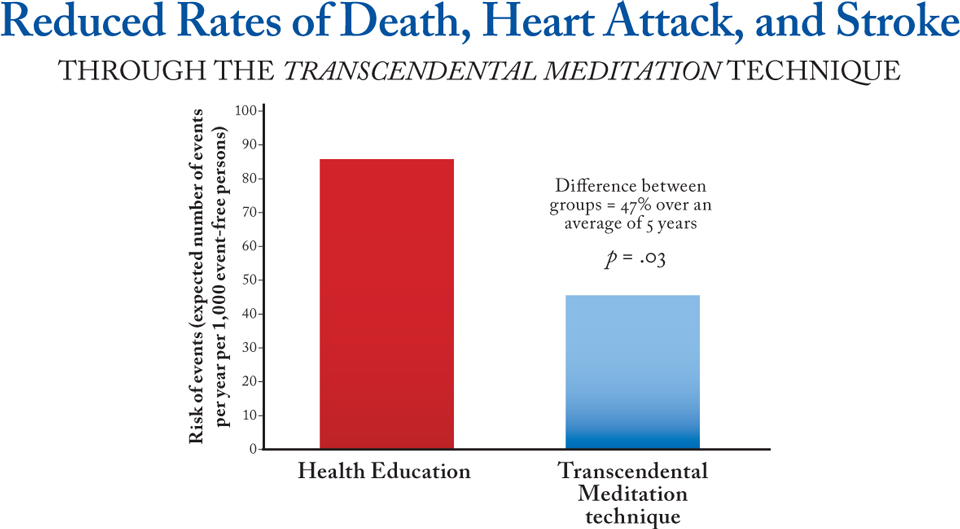 The results of a randomized controlled trial of subjects who had known heart
disease and who participated in the TM program or a health education control
group showed a 47% lower risk for death, heart attack, and stroke in the TM
group over an average of five years compared to controls. All subjects continued
their standard medical care during the study. Results suggest that the TM
technique is a new, effective method to reduce the risk of cardiovascular disease.

Transcendental Meditation has profound benefit for our overall health, and especially for our heart health. This is important for women’s health as around 2 million women have cardiovascular disease in Australia and it is the leading cause of death among Australian women. Over 60% of women who die from heart attacks have had no previous symptoms. Most Australian women (90%) have at least one modifiable risk factor for cardiovascular disease (CVD), while half of all women have 2 or 3 modifiable risk factors.

Poor diet, lack of exercise, being overweight, high cholesterol, high blood pressure, smoking, excess alcohol consumption and excessive stress are all risk factors for developing heart problems. This indicates that CVD is largely due to unhealthy lifestyle choices and therefore, in many cases, is potentially preventable. Stress is the major risk factor as it not only contributes to high blood pressure, stroke and ischemic heart disease but also compounds poor lifestyle decisions. We can have the best intentions in the world, be aware of the latest research on risk factors, be educated about healthy eating – but if we are stressed or feeling depressed we are less likely to prepare a healthy meal or go for a walk.

A healthy heart begins with a healthy mind. When faced with a stressful situation, the body responds by going into fight or flight mode. The heart rate increases and the physiology functions in a state of heightened arousal. This introduces a cascade of stress hormones and biochemicals into the body that places the cardiovascular system under greater pressure. When the stressful situation has passed the body goes back into its normal style of functioning. However in situations of chronic stress the body has less and less chance to normalise and the heart rate begins to stay aroused, leading to high blood pressure.

Overwork, chronic stress, fatigue and ongoing health problems contribute towards acute sympathetic nervous system arousal which creates imbalances in the nervous system biochemistry. These changes result in an exaggerated response to stress evidenced in increased blood pressure and constriction of blood vessels. Transcendental Meditation both reduces stress and decreases cardiovascular reactivity to acute stressful events. In most cases there is a significant drop in high blood pressure within 1-2 months of learning TM.

Research shows that during the practice of TM, the physiology experiences a state of profound relaxation. This is indicated by greater decreases in respiration rate and plasma lactate levels compared to ordinary rest, and a significant decrease in basal skin conductance. These are all indicators of deep rest.

In this state of deep rest the body is able to throw off deep rooted stresses and revitalise itself. In fact, research proves this revitalizing effect showing that after 5 years of practising the TM technique, people are up to 12 years younger biologically.

Transcendental Meditation has profound benefit for our heart health; it reduces stress levels and revitalises the body, makes the physiology more resistant to stress and significantly reduces risk factors for cardiovascular disease. Research shows there is a 47% reduction in deaths from cardiovascular disease in people practising Transcendental Meditation.

For all of these reasons, I recommend that all women learn this simple technique to reduce stress and eliminate the cause of disease – it is both a preventive approach and a simple solution to major health problems faced by women today.