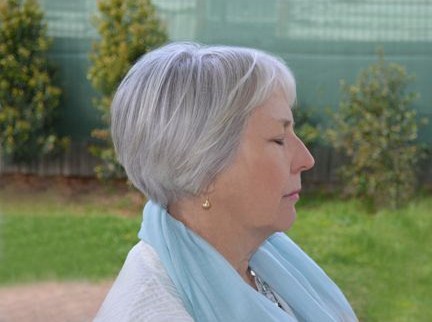 Rest – the basis of balanced activity

Good health has its basis in rest – and the natural alternation of activity and the rest we gain from sleep is what maintains a healthy balance of mind and body. Deep rest neutralizes stress and allows accumulated fatigue to be released giving us the clarity of mind and energy we need to perform action effectively.

However, with the fast pace of modern life we often do not get the rest we need to maintain that healthy balance. Women often feel the stress of the competing demands of work and family life, and may find it difficult to get enough rest.  In fact, about 1.7 million Australians suffer from chronic insomnia..

The unique rest of TM

TM is the stress management technique most widely recommended by doctors because of its proven benefits. Each twenty-minute session of Transcendental Meditation gives you the experience of a unique state of profound rest that naturally dissolves deep-rooted stress and fatigue.

It is a mental technique, but as the mind settles down during meditation the body correspondingly becomes deeply rested. The research shows that in this deeply rested state the sympathetic nervous system, which controls the body’s stress response, quiets down. As a result, stress hormones such as cortisol and adrenaline are reduced.

As these physiological changes take place in the system, the effects of accumulated fatigue and stress naturally decrease. Stress can affects us differently – some may have insomnia or headaches, others may feel anxious or depressed, while others suffer from more serious ailments such as high blood pressure or cardio-vascular disease. All these diseases are stress related, and improve with regular practise of TM.

From better health to more enjoyment of life

The health benefits of the TM  begin with your first meditation and become more established over time. With regular meditation, your body eliminates not just daily tensions, but the deep-seated stress and fatigue that cause poor health. TM is more than just a technique to gain deep rest. As stress is reduced and eliminated, your mind simultaneously experiences a more rested, happy and peaceful state, which gives rise to greater enjoyment and personal growth in life.

There are more than 600 studies documenting the health and psychological benefits of the TM technique, for example:

Over the past 20 years, the National Institutes of Health (NIH) in Washington, DC have contributed over $26 million in funding for studies on TM and cardiovascular health. For example, in a ground breaking nine-year study published in 2009, heart disease patients who practised TM had almost 50 percent lower rates of stroke, heart attack and death compared to non-meditating controls. Additionally, the meditators experienced a significant reduction in blood pressure and psychological stress.

With regular daily practice of the TM technique, vibrant health develops in your mind, body and spirit leading to greater enjoyment and happiness in life.

Other Benefits of TM

A five-year study of medical care utilization statistics of people practicing the Transcendental Meditation program (mean N = 1,468) found an overall 56% reduction in hospitalization rate compared to the norm. In terms of the leading causes of death in the U.S., the findings include –87% for heart and cerebrovascular disease, –55% for cancer, –73% for nose, throat, and lung diseases, –63% for injuries, –87% for diseases of the nervous system, including Alzheimer’s, and –65.4% for metabolic diseases, including diabetes.

A five-year study of medical care utilization statistics on 2,000 people throughout the U.S. who regularly practised the Transcendental Meditation program found that their overall rate of hospitalization was 56% lower than the norm. The group practicing the Transcendental Meditation technique had fewer hospital admissions in all disease categories compared to the norm (see chart on p. 15). The highest rates of reduction in both hospitalization
and outpatient visits occurred in the 40+ age group, which normally has a higher rate of health care utilization than younger age groups, resulting in substantial cost savings. 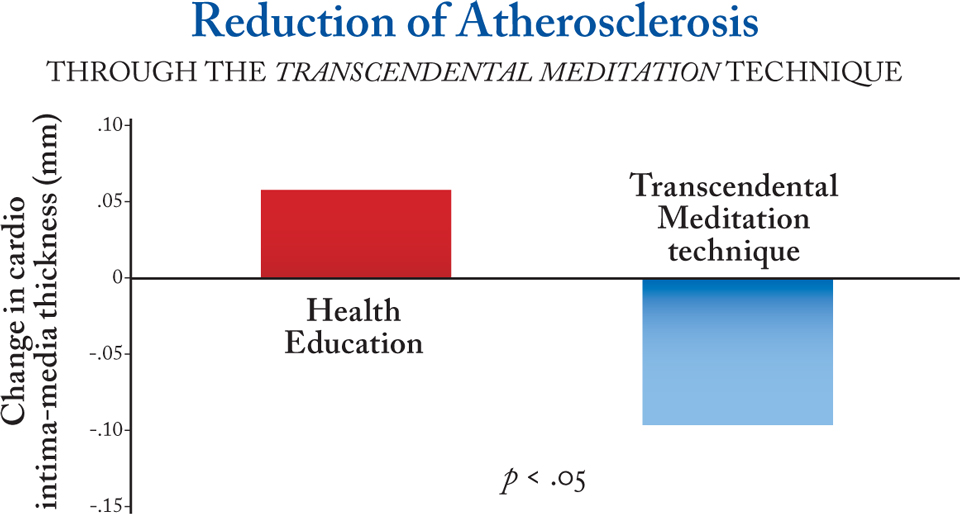 This study found that those who learned the TM program showed reduced thickening of the carotid artery. This finding was in contrast to continued thickening of this artery among a control group who took a health education program on diet and exercise for alleviating cardiovascular problems. Reduced atherosclerosis in the carotid artery has been found to correlate with less disease of the arteries in the heart and brain, which leads to lower rates of heart attacks and strokes.